In the year 1954 Eisenhower was President and some wannabe named Elvis Presley was a barely-discovered singer on the Memphis music scene. Nestled in the frenzy of Cold War buildup, the Pentagon took delivery of their first Lockheed C-130 Hercules transport aircraft. Both the singer and the airplane had something else in common: As with anything new and unproven, no one at the time knew or necessarily cared what their respective legacies would be. 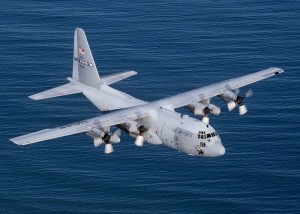 What we know now that we did not know then, and why the average citizen who typically has no interest in military aircraft should care, is that the Hercules would become an aviation legend and one of the few success stories of government spending. It will take off or land on short, crappy, unpaved runways and haul about 40,000 pounds of whatever will fit inside at 330 miles per hour for 2000 miles. It is the only aircraft operated by all five branches of the military. It has been used both to kill people and rescue them from death. The internationally-acclaimed U.S. Navy Blue Angels use one as a support aircraft (“Fat Albert”).  There is no shortage of customers for the Hercules. Recently, the Filipino air force added itself to the list of foreign countries that covet the C-130 and collectively buy hundreds of them. In different variations, it is a flying gas pump, freight train, hospital, fire truck, police car, weather station, secret spy den, gun platform, and troop hauler. It can unload cargo without even landing. There isn’t anything it has been asked to do and failed. The Lockheed-Martin C-130 Hercules has no peers.

The only experience I’ve had with a C-130 was when I went with my dad to visit the U.S. Air Force Museum at Wright-Patterson Air Force Base in Dayton, Ohio. They have the “Spectre” gunship version on display. The aircraft, in a word, is sinister. Windowless and dark colored, high speed rotary Gatling guns pointing out one side remove any doubt as to what the Spectre is used for. A few guns on a large airplane do not sound like much, but these things are h-u-g-e. They take up pretty much the entire cargo area and spit thousands of 20 millimeter shells every minute. It’s hard to understand the magnitude of these weapons until you see one in person. That aircraft has a creepy vibe you can sense just by standing there. If I were a bad guy, I would run, run, run, for my life at the very sight of a Spectre, although it may not do any good. 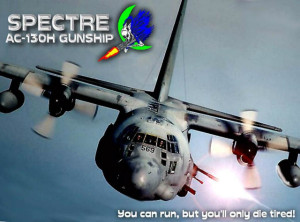 It says something about American ingenuity when a military aircraft that made its debut exactly six decades ago this month is still relevant and in production. The Hercules has been through many upgrades and facelifts, but the basic design from 1954 is still flying strong. Today, a C-130 costs about thirty million dollars before it’s equipped for a specific task. By Pentagon budget standards, that’s coffee change. By everyday taxpayer standards, it’s a lot of money. But thirty million for an aircraft that can do so much and has a service life of over half a century is a pretty good deal by any standard.

The U.S. Coast Guard (which, by the way, also has an August birthday) is the only branch of the U.S. military that includes saving lives and property as one of its stated goals. They’ve been doing it with honor since 1790, and in 1958 they added the C-130 to their inventory. It’s hard for me to buy into the idea that an inanimate object can be a hero, but there are an untold number of people who need no persuasion as they know they are alive today only because a Coast Guard C-130 saved them from peril when nothing else could. Whether it’s a hurricane in the Gulf of Mexico, an oil spill in Alaska, a ship wreck in the Atlantic, or a medical emergency at the South Pole, almost nothing assures survivors that things will get better soon like the comforting sight of a mighty four-engined, white and orange U.S. Coast Guard C-130 arriving on the scene. 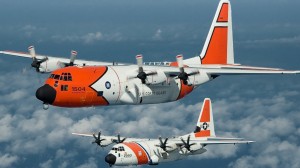 We hardly ever hear of the government getting something right because, honestly, they hardly ever do. Government incompetence is so common, it’s become a late night comedy show punchline. Most citizens are not as much against paying taxes as they are against wasting it on nonsense and graft. Even me, as a devout Libertarian, would whine a lot less about my tax bill if I had some confidence that I’m getting a good deal for my money. But fair is fair, and when the government does actually get something right, they deserve credit. The Lockheed-Martin C-130 Hercules is more than just a good deal, it’s the “Elvis of Airplanes”: A beloved, timeless legend that performs flawlessly and will be revered long after the last one makes its final landing, which is not expected until the 2030’s. By then the Hercules will have been in service for eight decades.

As cool as Elvis was on his own, he still needed his guitar to help sell the act. And so it is too for the real, human heroes who use the C-130 to do so many incredible things. Any military person knows having well-tested, solid equipment is essential to completing the mission. I expect to get back to Dayton, Ohio one of these days. When I do, I’m going to pay Hercules a visit. The old bird is never going to swing its hips to crowds of swooning fans, but there are plenty of military veterans and survivors of disasters who know what the headline act will be when it really matters.