I’m going to say it straight up: I never was much of a jock and do not enjoy going to the gym. Some people are into working out to the point that it’s a full time lifestyle. To me it’s something that needs to be done for my own good, like brushing my teeth. Not quite a drudgery, but not my idea of a great time either. And I don’t spend more time doing it than is absolutely necessary. I may not like working out, but I certainly like the results: It’s nice to be able to lug fifty pounds of cat litter up the stairs without huffing and puffing, or play basketball with my young nephew and easily keep up with him. 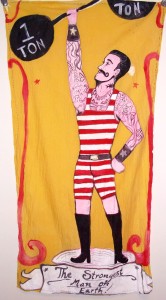 Today I dutifully reported to the health club and stepped onto the elliptical runner for the first part of my set. With The Howard Stern Show streaming from my smartphone, I readied myself for a thirty minute uphill run. The machines are placed on an elevated platform that has a great view of rest of the facility. From there I can see most everything. Health clubs, especially one like mine that isn’t marketing itself to be trendy, tend to be gathering places for some rather odd people. For my own benign amusement, I’ve given funny names to some of the regulars: Weird Dancing Quarterback Lady, The Solar System, Cute Boy Crew, Colonel Flagg.

What is surprising –and inspiring– is the numerous older people (meaning retirement age and up) working out. They are there, day after day, and keep moving. There are a few who appear to be well into their seventies and are in amazing shape. Being around them makes me want to run faster up a steeper hill. It doesn’t make me enjoy it more, but looking at those old dudes I think to myself, “I want to be like that when I’m 70!” They motivate me without even knowing it.

There is also something to be learned from the people you don’t see. I know they are out there. They are the ghost clients who pay month after month but hardly ever make an appearance. There must be some psychology that convinces them as long as they maintain the membership and thus keep open the option of going, then they have the right to feel like they are doing something. Every single health club in the country would go out of business within a month if they were paid only when someone actually walked through the door.

Physical exercise brought on a new attitude I would not have if I spent that time doing something else. Because I had never been into sports as a kid and was not serious about staying in shape until I was well into adulthood, the feeling was a complete surprise. On the surface it doesn’t seem that running on a machine a few times a week would mess with your head (in a good way), but it does and there is quite a bit of science out there to support the concept. I leave the club refreshed and positive. I’ve never finished a set and left in a bad mood.

The attitude improvement came in many forms but the most notable was my new willingness to give the benefit of a doubt and avoid judging others. How do I know that 250 pound lady did not weigh 350 pounds a year ago? How do I know that guy struggling to stay barely above a walking pace on the treadmill didn’t just have heart surgery? It’s bad for my psyche to concern myself with these matters. I mind my own business and chuckle at Howard Stern. It’s not my place to try to figure out others’ motivations…or lack of them. We are all just a mass of sweaty souls, each at a different place on the path, but still equally on the path nonetheless.