I recently went through a short period at my job where my schedule was juggled and I got stuck working undesirable hours. It was a temporary arrangement and I fought hard to get out of it, but with summer vacations and a coworker on disability, the scheduling holes needed to be filled. It sucked; yet as much as I don’t like having my work life messed with, I came out the other side a better person.

I am a communications electronics technician. We don’t turn the cell towers and the TV and the internet off at 5:00 every afternoon and leave. If you are getting service on your cellphone, or watching the Insomniac Channel, or shopping on Amazon in the middle of the night, that’s not magic. It means real people like me are out there working hard to make it happen. Every moment of every day. We never close.

As I pushed through the first of my series of odd shifts I resented the idea that I was there while everyone else is sleeping in. After a while, I became more tempered and introspective. “There are a lot of other people working crappier hours for a lot less than what you earn,” I thought. “Don’t be a whiney crybaby. You’re not better or more deserving than anyone else.” The work life reality check was well timed. 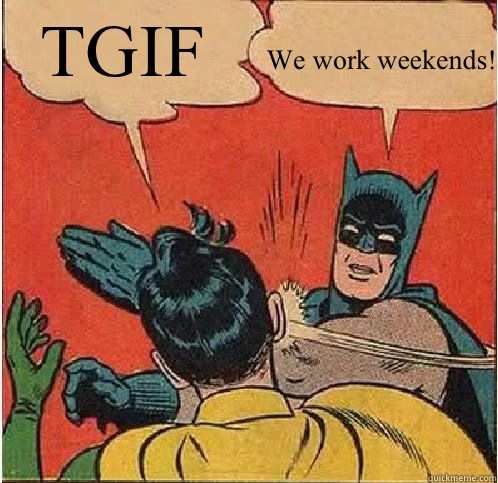 My employer’s clients demand that we be there for them around the clock. Reading into this a little further, I like to shop and eat out on weekends and holidays, and late at night, much the same as anyone. When I’m wandering through Target at 8:00 on a Sunday night, I am supporting the very thing that I resent being done to me. If it were not for people like me, the Target employees would be at home resting. They are there because that’s what their clients want.

Not too long ago the world did not turn so fast and consumer demands were more modest. Every business was closed on Sunday except the pharmacy and the grocery stores, which were open until 1:00pm to catch the after church crowd. When the supermarket “expanded” its hours to 6:00pm, it was a big deal. Even gas was hard to get on Sunday. Since that halcyon era it’s become an expectation to be able to get anything, any time.

As I rolled home from work late Sunday I drove past the shopping malls and fast food places and movie theaters, all of which had full parking lots. On any other occasion I would probably stop and pick up a few things and not think much about how my shopping habits effect the work life of others. But on that particular night I didn’t want to be complicit in creating a reason for all these places to be open. I know I’m a hypocrite. I freely confess I am a perpetrator of the we-never-close business concept as much as I am a victim of it.

My future work life will probably include more undesirable schedule changes. There is a certain humbling effect in that it gives me more respect for those who work odd shifts as a matter of routine and get paid much less than myself. I’ve gone far in my profession, and in the hierarchy of my workplace I’m near the top. Occasionally pulling the junk shifts no one wants keeps me from getting too full of myself…and that can only result in a better work life when I’m on the clock, and a better, more grateful me the rest of the time.