There are a lot of ways to identify a blubbering idiot.  The most common is when someone announces that they have the “right” to do or say something, then proceeds to make a big dramatic spectacle of doing it. At that point the odds are very good that they are in blubbering idiot territory.

Flag burning as a form of protest has seen something of a renaissance lately. The self absorbed, mostly millennial-aged activists represent a huge buffet of causes and think they are being edgy and progressive, but we of more vintage know that flag burning is an old trope that goes back to the Vietnam era. I presume one of the protesters’ goals is to convince others to join their cause; apparently they have not figured out that flag burning  is appealing to no one except those who were already on their side in the first place.

Burning the American flag is an offense far beyond any single cause because it is the symbol of all just causes. The average protester does not have enough brain cells to understand the irony of destroying the very symbol of what protects their freedom to protest, or that it reflects the protesters’ own weakness and lack of courage.

They don’t burn the flag to advance their cause. They burn the flag for the shock value and to be hurtful. That’s really what this is all about. They’re like a recalcitrant angry child screaming “Mommy I hate you!”. Their immaturity does not allow them to express themselves in any reasonable way, so they lash out with the only weapon they have–inflicting emotional pain.

When a protester is asked why they are protesting, the answer is almost always some nebulous statement about “rights,” either theirs or someone else’s. I do agree that burning the American flag is a Constitutionally protected First Amendment right, even as I personally find it deeply offensive. But my individual sensibilities are not a basis for a legal or moral system.

I’m sure the flag-burners are likewise offended that I exercise my Second Amendment rights by packing a gun everywhere I go. The difference of course is that I do not carry a gun for the sole purpose of upsetting anyone, although it does not bother me at all if someone is. No one has the right not to be offended, and that concept is a two way street. One could fill many gigabytes of computer memory discussing the contradictions and double-standards that revolve around the flag. 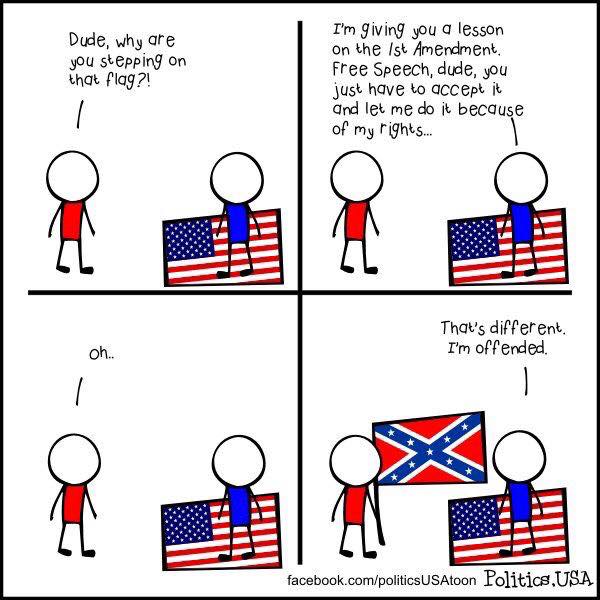 One sign of maturity and wisdom is the ability to accept an opinion you disagree with and not take it as a personal affront. The flip side to this is mature people do not deliberately inflict emotional pain as part of, or in many cases in lieu of, making their point.

The other day a television news channel featured a story about protesters protesting the recent US Presidential election by burning an American flag. Unfortunately for the protesters, the coverage was almost totally devoted to the flag burning. Barely any mention was made about what they were actually protesting against.

And so it is with such childish and disrespectful overtures. The flag burning becomes the issue and no one pays much attention to whatever the hell it is they are complaining about.

I suggest that the best response to flag burning is to be passive and let it go. I know it is difficult, but not all wrongdoing is worthy of intervention. Anti-flag burners do not want to descend into a state where they think everything that offends them should be eradicated from the Earth. If that sentiment sounds familiar, it’s because we already have an entire generation of runny-nosed milquetoasts who need puppies and Play-Doh just to get through the “trauma” of an election that offended them, but apparently not enough for most of them to participate in.

Burning the American flag is Constitutionally acceptable (albeit offensive) free speech. Honorable men and women have fought and died for our rights, and that includes the right to be a blubbering flag-burning idiot. I have no confidence that someday the idiots will see their foolish former selves immortalized forever on YouTube and be embarrassed enough to join the ranks of we who understand that the reason you shouldn’t is because you can.

2 thoughts on “The Reason We Shouldn’t Is Because We Can.”