I have fifty two items on my Amazon “wish list”. I don’t know how that compares with the average shopper, but I’m going to guess that I am a lightweight by Amazon standards. My wish list is just that..things that would be nice to have but are not particularly a priority. Some of the items have been on my list for years. The older I get, the easier it is to want stuff less. And the stuff I do want has a higher, long term purpose. Materialism for materialism’s sake is the source of a lot of the world’s problems.

During a recent weekend road trip I found myself hanging out in a very huge, very famous, and very upscale shopping mall. I’m not much of a mall person, but I do like to people watch and enjoy the experience of being around the energetic liveliness. As we strolled past the $1000 Coach purses and $600 North Face jackets, I noticed that pretty much everything that is sold in this mall is not necessary for daily life. I could not spot a single item that was truly needed and did not have a more reasonably priced alternative. I’m sure all those people in the North Face store were not there to provision themselves for an ascent of Mount Everest.

No one chooses to be poor, but materialism is a deliberate, conscious decision.

I don’t understand what motivates anyone to be sucked into the vortex of materialism. I try hard not to be judgmental, but it sure isn’t easy. Ultimately, I understand that how others spend their money is none of my business. At the same time though I don’t feel too sorry for all the people who are up to their eyeballs in debt from impressing themselves and everyone with their trendy, premium brand stuff. No one chooses to be poor, but materialism is a deliberate, conscious decision.

Reaching a stage in life where it’s pretty certain that I am not destined to be rich is in a way, liberating. It does not bother me that I can’t (or more accurately, shouldn’t) buy the North Face jacket. It does not bother me that some of my neighbors have spent more money on cars than I have spent on a house. It’s not that I’m poor, it’s that my priorities go beyond the materialism of now. My focus is on things that matter, like securing my retirement and making room in my future plans for friends and family members who are not as well situated as me. 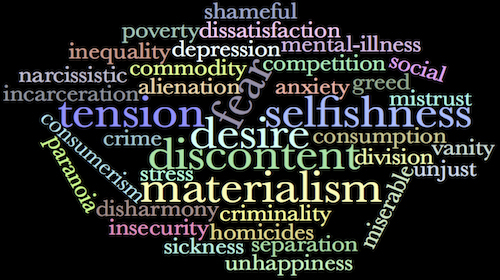 The Buddhist religion teaches that desire is the source of evil. If we remove desire from our hearts, then evil would by default not exist. I admit the previous synopsis oversimplifies one of the world’s great religions, but it does call attention to a valid point of Buddhism: Desire (from which materialism is derived) is a driving force behind pretty much everything bad.

I think we’d be in a better place if people desired less stuff. Unfortunately, we live in a society that celebrates materialism, and social media is eager to feed the pig. For months, one of my “friends” filled the internet with weekly photo updates of their new house construction; it read like an over the top real estate listing. The news feed was briefly interrupted only to announce their new boat and ski trip to Aspen. This person is not an outlier. Facebook is brimming with photos of new cars, exotic vacations, and expensive dinners. It seems no one can resist running to their computers to show off their bling.

Maybe I was a Buddhist in a previous life. Maybe I’m just simpleminded. For sure I’m not the kind of customer a mall operator loves to have around. They might get me for a $6 slice of pizza or sell me on an occasional good deal, but most of the time it’s easy for me to keep my wallet in my pocket and walk on by. Buddha has been dead for about 2400 years and his message is still relevant. There is great personal peace in being happy with what I’ve already got and feeling no intense pull to have more. Removing oneself from the materialism of now settles and warms a soul like no six hundred dollar North Face jacket could ever approach.