A favorite recurring topics here at Twenty First Summer is young people displaying an amazing understanding of personal honor, maturity, and respect for others that reaches decades beyond the few years they’ve been around. I’m blessed to have people like this in my own life and it makes my heart cheer to be reminded that it’s not just me who is the lucky one. High school swimmer Michael Spark is that reminder.

Michael Spark and Rich Fortels are high school athletes on competing swim teams. In a major conference meet, Spark came in second to Fortels, but when Fortels was disqualified because he did not turn his swimmer’s cap inside out to hide a club logo (per high school sports rules), the first place win was given to Michael Spark. Fortels’ coach appealed the referee’s call, and lost.

You heard that right. Rich Fortels, who broke a 14 year old record and finished the race more than two seconds faster than Micheal Spark, was kicked out over a swim cap, or more specifically, the logo on a swim cap!

“He beat me fair and square. He beat me because he trained harder than me.”

Spark could have kept his award and spent the rest of his life telling everyone he was a champion swimmer in high school. And technically, according to the rules, he would have been correct in that belief.

Michael Spark is a sportsman, not a lawyer. He had enough respect for himself and his competitor to see that winning because of a technicality was nothing to be proud of, so he later personally gave his gold medal to Fortels and congratulated him on his win.

Rules may be rules, but a rule is not automatically fair just because it is a rule. Michael Spark knew a printed logo on a swim cap gave Fortels no competitive advantage. He knew Fortels was the better swimmer, and even admitted so. “He beat me fair and square. He beat me because he trained harder than me,” Spark stated, “He out swam me. He beat me on that day and that race.”

Michael Spark’s remarkable act of sportsmanship and goodwill does not change the official records. He is still the recorded meet winner. But in this story, that’s not the point.

The news media is choked with stories about bratty overindulged kids who expect an award for getting up in the morning. Quiet acts of decency seldom become a top story. That’s why this blog will continue to spread the word about amazing young people wherever they can be found. And there are a lot more of them out there doing the right thing, not expecting to be the center of attention.

Years from now when Michael Spark is an old man, he will not have to live with a nagging voice inside telling him that the records and the rules can say whatever they want, but that other kid beat his ass good. His conscience will not tease him about how the real champion with the forgotten name was over two seconds faster lost only because of some lame technicality that had absolutely nothing to do with who was the stronger athlete.

And years from now when Rich Fortels is an old man, he can show his medal to his grandchildren and tell them the incredible true story of a competitor’s spirit of fair play. He will not have to live with the bitter memory of what should have been. He will not carry the weight of resentment. He can hold his head high knowing that a selfless rival gave back the honor that some goofy rule took away.

Micheal Spark let go of an award that meant a lot to him but he gained the deepest respect of a competitor and countless strangers who heard this story.  Many of  those strangers are  parents themselves and will be praying to God that their kid would do the exact same thing if faced with a similar situation. When kids do something  so profoundly right, it ripples out like the waves in a pool, touching others and serving as a living example that character is an award in itself.

Last week’s Twenty First Summer featured my thoughts about James, an impressive young man who has a heart and a brain and knows where he’s going. They must put something in the water in the midwestern USA. Or maybe they still teach kids about honor and respect and character. The evidence just keeps rolling in:

Today’s story of kindness that has exploded across the internet actually started a year ago: Three members of a middle school basketball team from Kenosha, Wisconsin walked off the court in the heat of the game to confront a fan of the opposing team who was heckling Desiree Andrews, one of their cheerleaders. Desiree, or D as she is called, has Down’s Syndrome. I’m not sure where the dividing line between ordinary sports event trash talking and cruel bullying is, but I am absolutely certain that mocking a Down’s Syndrome kid in front of a crowd of spectators is light years past that line. 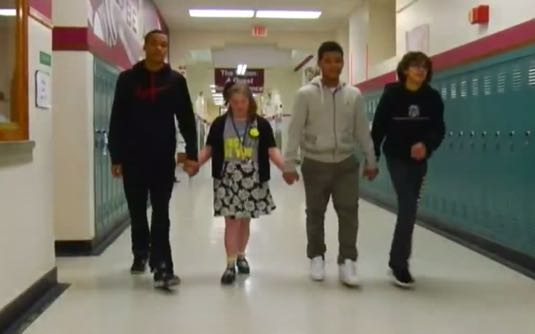 The incident earned D three protective “big brothers.” She may not need them, though. Since the incident last year, she has won over the entire school in a way that indicates that the kids at Lincoln Middle School understand acceptance and inner beauty well above their grade level, so much so that they named the gym where this incident happened “D’s House,” after Desiree. It’s important to point out that this idea came from the student body, not the parents and administrators.

The cheerleading squad is a bitchy clique at most schools. Only the best looking, most popular girls make the cut, and they don’t let anyone forget what princesses they are. Is this a stereotype? Probably. But it’s not a completely unfair one. Let’s not fool ourselves: At many schools, D would not even be considered for a spot on the squad. Yet if one bothers to look past the superficiality that drives these decisions, giving her a chance makes complete sense. The real purpose of having cheerleaders is to stir up school spirit and create a positive vibe. Desiree has accomplished this goal almost singlehandedly. How on earth can anyone make an argument that she’s not a good cheerleader and role model for her school?

What is most beautiful about people like D is their authenticity. They don’t have a grasp on social conventions like the rest of us, so they are completely honest in everything they do and say. This can sometimes result in obnoxious behavior, but most of the time we get a person who is gentle and kind and childlike-innocent because that’s the way they really are. They are not capable of pretending to be anything else. People like D make terrible actors unless the part is to be themselves.

Probably without realizing it, D has forever changed many lives. The kids at Lincoln Middle School will go forward having seen for themselves the power of kindness and friendship and character. I’m going to be an optimist and say that kids today are mostly good. For every negative story about them that pops up in the media or on the internet, there are dozens of positive stories no one ever hears about. In that way, D is a cheerleader for her generation as much as she is for her team.

D’s friends both old and new learned early in life that kindness is more affirming than cruelty, befriending an outsider carries more rewards than risks, and both loyalty and dishonor will come back to you in proportion to how you gave it to others. It was not a planned lesson, but the most meaningful and lasting lessons never are. Years and years from now, as new classes of kids cycle through Lincoln Middle School, they will be told how and why “D’s House” got its name. It seems Desiree Andrews, the Down’s Syndrome kid who just wanted to be a cheerleader like all the other girls, has instead been given a permanent teaching position.