Homeowners who hire a contractor for every little job cannot understand the pride and satisfaction of completing a do it yourself project that will make a house more enjoyable or increase resale value. Some of us take on a lot of home improvements that we probably could afford to contract out but choose to do ourselves anyway because there is a certain “it factor” that makes these tasks an attractive challenge.

Most jobs are very simple in regards to the mechanics of the work required. Like all things though, the real world experience is often much different. I recently installed some exterior lighting on my house. The basic procedure is easy: Run some wire. Screw light to side of house. Connect wires at both ends. Done. It all looks so easy in theory!

The headaches come in when you have to run the wires through walls or other not so easy to reach places, or when the hardware that came with the light is not compatible with your application, or when you are trying to make something both functional and not look like sloppy crap nailed to the side of the house. 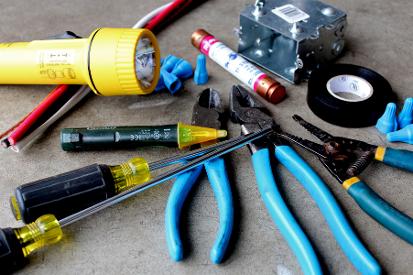 My dad has been doing his own home improvements longer than I’ve been alive, and he’s really good at it. He holds himself to a very high standard of craftsmanship, and after he completes a job, he will scrutinize every little detail and find something he would have done differently. It’s a learning process that I’ve adopted myself with very good results. Wise men never think they know it all.

In my circle of friends I’m known as the guy who always has a tool in his hand and hardly ever pays others to do things for me. Doing my own home improvements has the unexpected benefit of teaching me patience and discipline. All jobs look easy in concept. In reality, none go exactly as planned with no setbacks. The principle transfers to other areas of life. Having a plan is great, but there must be enough built in flexibility to address the inconvenient reality that life events seldom fit exactly into our preconceived plans.

Once someone is programmed for achievement, it is very difficult for them to set boundaries of when they will give their best effort and when they will not.

Home improvements are a perfect metaphor for how the real world works: I had the knowledge and tools needed to install an exterior light. I had a visualized plan of how I wanted to attain the goal. Once I began the task, I ran into unplanned setbacks. Some of these delays were due to my own oversight (drilling two holes when I only needed one). Others were out of my control (bad weather, incompatible hardware). Nothing gets done by getting angry at myself or cursing the weather. Keep moving, solve problems, find a way to get to the end.

One reason why athletes who are successful in their sport also tend to be successful in other areas is because they redirect the drive and motivation from the playing arena into their entire life. The same could be said for military people. Once someone is programmed for achievement, it is very difficult for them to set boundaries of when they will give their best effort and when they will not. A properly trained athlete or soldier is in “on mode” all the time, even years after they are no longer active in sports or the military.

Home improvements such as hanging a light do not rank high on the glorious achievement scale, but the commitment to complete them with skill and pride is very meaningful to those who spend countless weekends and vacation days toiling on their homes instead of paying a contractor.

Deeper than money saved is standing back and admiring one’s own finished project and the feeling of independence and empowerment from not having to rely on paid help. Every time I walk past that light I’ll know how it got there: Not from farming the work out to others and handing them a check when it’s done, but from my own determination, sweat and ingenuity. I’ll need all the can-do positive energy I can get when it comes time to replace my hot water heater, which I suspect will be soon.

Everyone knows a tool idiot, or perhaps are one themselves. I don’t intend the term to be as disrespectful as it sounds. A tool idiot is a wannabe do-it-yourselfer who either grossly overestimates his or her ability to do a job, uses the wrong tools for the task, or has the right tools but does not have any skill using them. Tool idiots deserve credit for at least trying, but in many cases might have been better off not trying.

One recent hot summer morning I noticed the neighbor up the road cutting a tree down. He was clearly having difficulty, which is to be expected when one tries to cut down an entire full sized tree with a small electric saw. I gave a fleeting thought to going over there to help him, but hey, my own to-do list is already longer than the weekend. I also know that property is a rental so I wasn’t interested in working at someone else’s house for free while the landlord collects a rent check every month.

Late the next day I was driving by again and the same guy is hacking on the same tree, and most of it is still upright. My misgivings about providing free labor notwithstanding, I couldn’t take watching him struggle any more. I told him I would run home, change into work clothes and come back with the equipment needed to end his long, hot, miserable weekend of fruitless toil.

Within an hour of my return that tree was down and carved up into pieces small enough to carry. As I was leaving him on his own to clear the substantial mess, I was too polite to mention that for fifty bucks he could have rented a gas chainsaw and saved himself a day and a half of sweating his ass off while getting very little done.

He was both surprised and grateful at how quickly it all happened once the right knowledge and proper tools were applied to the task. Maybe it was divine intervention that he didn’t rent a gas chainsaw because I’m pretty sure he would have ripped a limb off with it, and I’m not referring to the tree. My floundering neighbor is a classic example a tool idiot: Well-intentioned, but hapless.

My dad is the exact opposite of a tool idiot. He owns, has owned, or has used pretty much every tool ever invented. He is the consummate handyman. From attic vents to sump pumps and everything in between, he has always done his own home repairs. Dad can pour cement, wire electric outlets, unclog drains, lay carpet & tile, put up fences, and tear down walls. He’s done several major renovations. He works on cars. Dad not only does it all, he does it with amazing skill. Even the stuff he screws up comes out twice as good as what the average person could pull off.

Guys like my dad are very hard to find now. The days of having do-it-yourself pride has been transplanted with a generation of tool idiots and a false belief that anyone can do it with no experience, no skill, and barely any effort. It’s a naiveté borne by television shows where some dude guts & remodels a whole house without even getting dirty.

People who barely know how to turn a screwdriver and whose garages are devoid of any sign of a homeowner with technical skills will spend a weekend watching HGTV and decide that’s all the “vocational training” they need to be master of all trades. Back in my dad’s time there were very few tool idiots. It was expected that most guys did their own fixes & upgrades because life wasn’t as simple as looking up a contractor on your smartphone and having them appear at your door within a few hours.

I’m not anywhere near my dad’s level, but I have a comprehensive collection of tools and can competently handle most homeowner issues myself. When I get stuck, I call my dad. He always knows what to do, and what not to do. When I look at a someone else’s project and I think to myself, my father would never do it that way,  I feel validated knowing that my daddy didn’t raise a tool idiot.